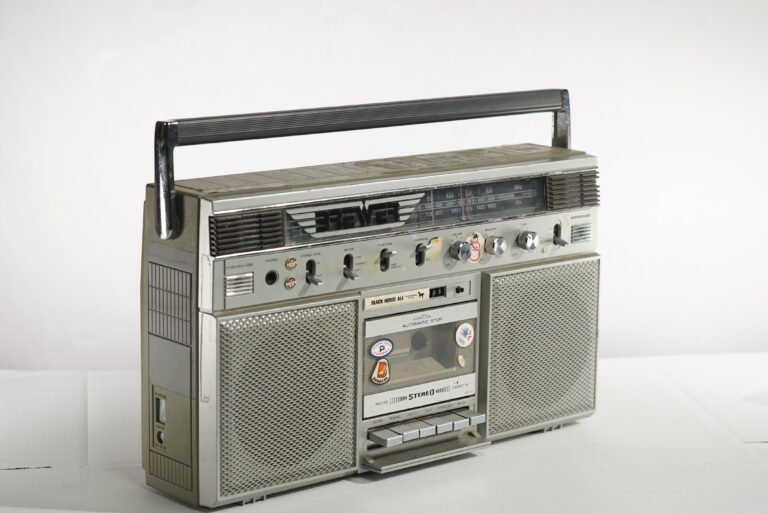 Using a Bluetooth Cassette Adapter like this one (Amazon Link) by Arsvita you can easily bring new life to your old boombox and start streaming any song you want.

If you’ve got an old boombox sitting on a shelf, there’s a great new way to give it new life.

Many boomboxes from the 1980’s have a radio and tape deck.  They may not have the bells and whistles that new portable speakers have, but you can’t deny that the old school boomboxes look awesome!  Unfortunately, even if you want to play you favorite mix tape on an old boombox, there’s a good chance that you won’t be able to.  The belts that spin the tape often go bad, and if your boombox hasn’t been serviced, it’s likely that nothing will happen when you put a tape in and press play.  The motor inside may buzz and act like it’s working, but the belts connected to it are likely shot.  They’re either broken, stretched out or degraded back to the black tar they were made from.  If you’re so inclined, you can try to rebelt the cassette deck.  It’s often quite difficult and you need the right size belts.  Definitely doable, but many people will find it to be more trouble than it’s worth.  Be aware that if your belts have turned to goo, it’s really easy to make a huge mess.

A better option now exists for adding new capabilities to that old stereo.  A cassette bluetooth adapter can allow you to stream music from your phone, even on boomboxes with non-working cassette players.  These cassette adapters are self contained with a rechargeable battery and bluetooth receiver inside.  They “trick” your boombox into thinking there’s an actual tape playing.  But instead of a tape being pulled across the tape head, the adapter uses an internal magnetic head to simulate the signal of a normal cassette. This allows the adapter to work even when the spindles of the cassette player don’t spin.

To use a bluetooth cassette adapter, you “play” it like a normal cassette.  But first you have to turn the adapter on and pair it with your phone.  You pair it just like any other bluetooth speaker or headphone.  In my case the Bluetooth name was “Arsvita” the brand of the adapter I used.  Once paired you use it in the boombox like any other cassette.  That means switching the input on your boombox to “tape” and pressing the “play” button on the boombox.  The volume on your phone can adjust the loudness, as can the volume knob on the boombox.  It’s best to keep the phone volume up around 75% and then use the boombox volume knob to fine tune.  And voila, you’re now able to rock out to whatever song you choose.

If this method doesn’t work for your boombox there’s likely a problem with your cassette player that’s more serious than just needing new belts.  If it does play, but the sound quality is bad, you might want to  us a Qtip with some rubbing alcohol to clean the cassette deck tape head.  Grim and buildup on the tape head can lead to distortion during playback.  Unfortunately, due to the nature of how cassettes work, this adapter may not give you the best overall quality, but it’s definitely good enough to enjoy!

Since so many old boomboxes have the same cassette problems, this is by far the easiest way to bring your old stereo into the modern era.  And if you want to take it to the next level, you can always try adding a rechargeable battery pack to your boombox.  With Bluetooth and a rechargeable battery you’ll have a portable speaker that rivals the features of a modern one- but yours will look much cooler!